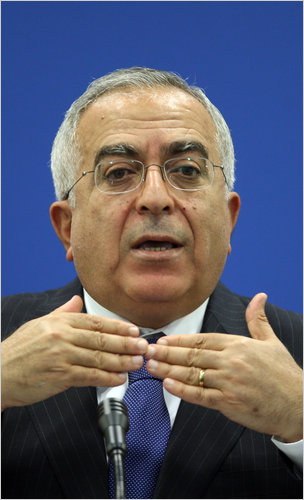 As we reported last week, the fragile Palestinian unity agreement has been looking like ending before it even begins. Fatah and Hamas have not been able to come to an agreement on an interim government and, as it stands, the upcoming UN bid seems to be the only point of agreement remaining between the two factions.

Meanwhile, a crisis seems to have hit the Palestinian Authority due to an inability to secure funding that had been pledged to the PA leadership. As Khaled Abu Aker and Isabel Kershner reported in The New York Times:

RAMALLAH, West Bank – The Palestinian Authority will pay its employees only half their monthly salaries in July, the prime minister told reporters here on Sunday, because of what he said was “the failure of donors, including our Arab brothers, to fulfill their pledges.”

Prime Minister Salam Fayyad added that the salaries would be paid in full when the promised funds arrived.

This crisis represents the true weakness in the current Palestinian infrastructure, despite the PA and Hamas’ claim that Palestine is ready to be an independent state. The PA, in fact, is still largely dependent on foreign aid to operate and, while the economy has been growing furiously in the West Bank at least, it has not yet reached the level of self-sufficiency.

As George Washington University’s Nathan Brown has outlined, despite the perception of many in the West of Fayyad as a quasi-messianic figure for the Palestinians, he has not quite lived up to the praise that many have given him.

He did not bring Palestinians to the brink of statehood. The Palestinian Authority, for all its problems, was actually far more ready for statehood on the eve of the Second Intifada in 1999 than it is on the possible eve of the third in 2011. A dozen years ago, Palestine had full security control of its cities, a set of institutions that united the West Bank and Gaza, a flourishing civil society, and a set of legitimate structures for writing authoritative laws and implementing them. Those accomplishments were in retreat long before Fayyad took office, and he was hardly able to restore them.

As Brown later notes, this is not at all to downplay Fayyad’s achievements in building-up what was a severely damaged and dysfunctional regime to begin with.

However, if Fayyad could not walk on water, he did an almost miraculous job of not drowning. This is not to damn Fayyad with faint praise; the prime minister assumed control of a Palestinian Authority that was unable to pay all of its salaries, deeply mistrusted by Israel, and treated as irrelevant by many Palestinians.

His first and most impressive accomplishment was to gain the trust of Western governments. The unrealistic hopes placed in his premiership were partly a testimony to the esteem in which he was held in some international circles… Fayyad was even able to earn a grudging Israeli trust through renewed security cooperation and efforts to rebuild the Palestinian security services. These accomplishments allowed him to pay government salaries, redeploy police, and attract enormous amounts of aid.

… The security services became less partisan, public finances became more transparent (even without any domestic oversight), corruption likely decreased, pockets of the civil service were rebuilt on a more professional basis, and basic order in Palestinian cities was improved.

The US has been threatening to cut aid payments to the PA unless it breaks ties with Hamas and stops seeking statehood without negotiations. The failure of other countries to pay-up, while a continuation of a long history of Arab countries failing to make good on their aid pledges,  could well be related to these two issues – while they may not speak out in public against what is being promoted as “unity” and “progress”, many states will fear giving legitimacy to a terrorist group like Hamas and will similarly be against a move like the statehood bid, which would spell the end of hopes for peace in the near future.

On the other hand, the lack of funds could be as a result of the instability in the region as nations are holding-off any diplomatic activity until the make-up of regional power becomes clear again. Either way, this is a major blow to the Palestinian leadership and Fayyad in particular. As the flotilla to Gaza unravels and several countries become increasingly critical towards the UN bid, Fatah is being pressed to seriously re-evaluate its trajectory before the aspiring state descends into chaos once more.