A handout satellite image shows a closeup view of a building damaged at the nuclear facility in Natanz, Iran, taken on July 8, 2020. (photo credit: REUTERS)

This Update deals with the significance of a series of explosions in Iran over recent weeks, which seem to be hitting targets associated with Iran’s nuclear and missile programs. The most well-known of these explosions struck an advanced uranium centrifuge assembly facility at Iran’s main uranium enrichment plant at Natanz on July 2 – but there have been a number of others, including one early this morning in Teheran.

We lead with a summary of what is known about the Natanz and other explosions, as well as the background to these events, from BICOM, the Britain Israel Communications and Research Centre. The report notes a claim by an unnamed “Middle Eastern intelligence official with knowledge of the episode” that Israel was responsible for the explosion in Natanz but not the others. The story also reports on Iran’s threats to retaliate and increasing pressure on Iran from the International Atomic Energy Agency to return to compliance with the 2015 JCPOA nuclear deal. For all the essential background on the issue of the explosions in Iran,  CLICK HERE.

Next up, David Albright, a nuclear physicist and former UN weapons inspector, summarises the interpretation of the Natanz blast reached by the organisation he heads, the Institute for Science and International Security. He says the damage to the centrifuge assembly plant was much larger than previously admitted, likely irreparable, and will constitute a very significant setback to Iran’s nuclear program given its importance to the program. For all the details, CLICK HERE.

Finally, we offer some analysis from Washington Insitute for Near East Policy expert Simon Henderson. He provides some additional technical background on what the centrifuge assembly plant was doing, how centrifuges work, and the extent of the setback to Iran’s nuclear program. In addition, he discusses the possibility that Iran will seek to respond against Israel if it believes Israel responsible – and whether this response might be an extreme one such as targeting Israel’s nuclear research facility at Dimona. For Henderson’s complete exploration of these issues,  CLICK HERE. (Henderson, who visited Australia as a guest of AIJAC in 2016, will be the guest at an upcoming AIJAC webinar on Tuesday, July 21. More details to follow.) 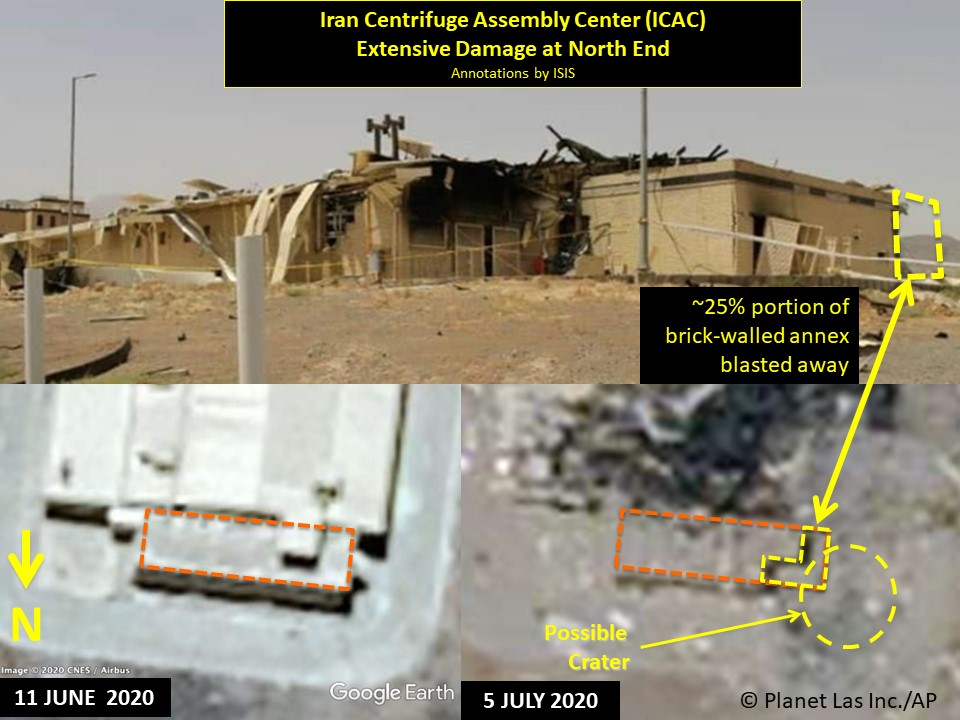 Image composite prepared by the Institute for Science and International Security which compares the image of the damage to the centrifuge assembly building at Natanz released by the Atomic Energy Organization of Iran (top) with before and after satellite imagery (bottom) which appears to prove the Iranian photo concealed most of the damage.

What happened: Iran has admitted that the nuclear site in Natanz suffered “significant damage” as a result of an explosion last Thursday. 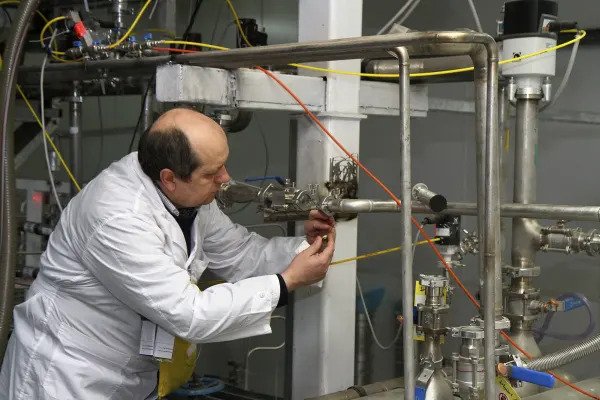 Context: According to Kamalvandi, a month after the US withdrew from the nuclear agreement in 2018, Iran began work on developing advanced centrifuges in Natanz following an order from Supreme Leader Ayatollah Ali Khamenei. Iran is using high-speed centrifuges to enrich uranium. Highly enriched uranium can be fuel for an atomic bomb.

Looking ahead: There is heightened concerns that Iran will try and retaliate against Israel. One option could be via Syria, either directly by the IRGC or through their proxy militias. In the last two years they have tried and failed to strike at Israel several times with rockets and UAVs.

Security expert David Albright told the ‘Post’ that some of the damage is likely irreparable. 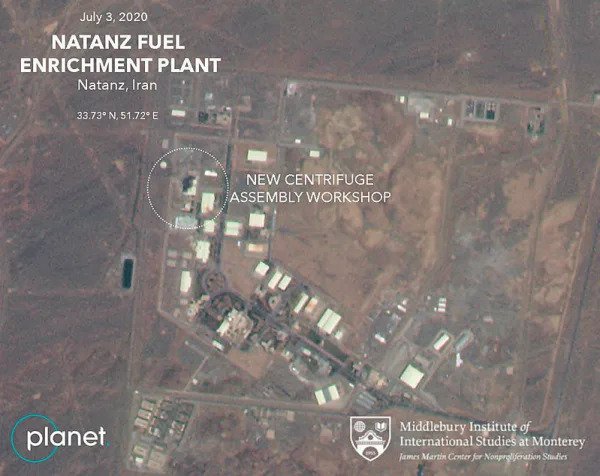 Satellite image from Planet Labs Inc. annotated by experts shows a damaged building after a fire and explosion at Iran’s Natanz nuclear site, July 3, 2020, within the context of the wider Natanz compound. (Credit: Planet Labs Inc., James Martin Center for Nonproliferation Studies at Middlebury Institute of International Studies via AP

Albright indicated that this latest revelation is based on two new satellite overviews showing a much fuller picture than footage that was released last weekend, indicating that the vast majority of the centrifuge assembly hall was wiped out.

This could mean there will be increased delay to Iran’s nuclear program, since it will have to recover from the incident.

“It is clear that a major explosion took place, destroying nearly three-quarters of the main centrifuge assembly hall, generating a fire that blackened a major portion of the building, the blackening visible where the roof had been blown away by the explosion,” Albright said.

According to the latest report by the think tank, “High-resolution commercial satellite imagery… shows that the Iran Centrifuge Assembly Center (ICAC) at the Natanz Enrichment Site has suffered significant, extensive, and likely irreparable damage to its main assembly hall section.”

Further, the report says, “This new facility, inaugurated in 2018, was critical to the mass production of advanced centrifuges, in particular the assembly of rotor assemblies, the rapidly spinning part of the centrifuge and its most crucial component.”

In terms of rolling back Tehran’s future nuclear program plans, the report adds, “An annex to the building was intended to assemble electrical components of centrifuges, including motors – another important component of centrifuges.”

Albright said that his institute’s findings are confirmed by Iran’s shifting story.

“While early reporting from Iran suggested that a fire was ‘limited’ and restricted to a ‘shed under construction,’” he said, “more recent Iranian admissions are stating that the damage was ‘significant.’”

The report said that “the visible damage is such that the entire building will likely have to be razed and rebuilt from scratch.”

It added that, “Advanced centrifuge rotor assemblies are typically assembled in ‘clean rooms,’ an expensive-to-build environment free from dust and other contaminants,” and a 2018 video showed what appear to be clean rooms at the facility in question.

Other destroyed items which could be hard to replace could include: “balancing machines, specialized rotor assembly equipment, measuring equipment and centrifuge test stands.” 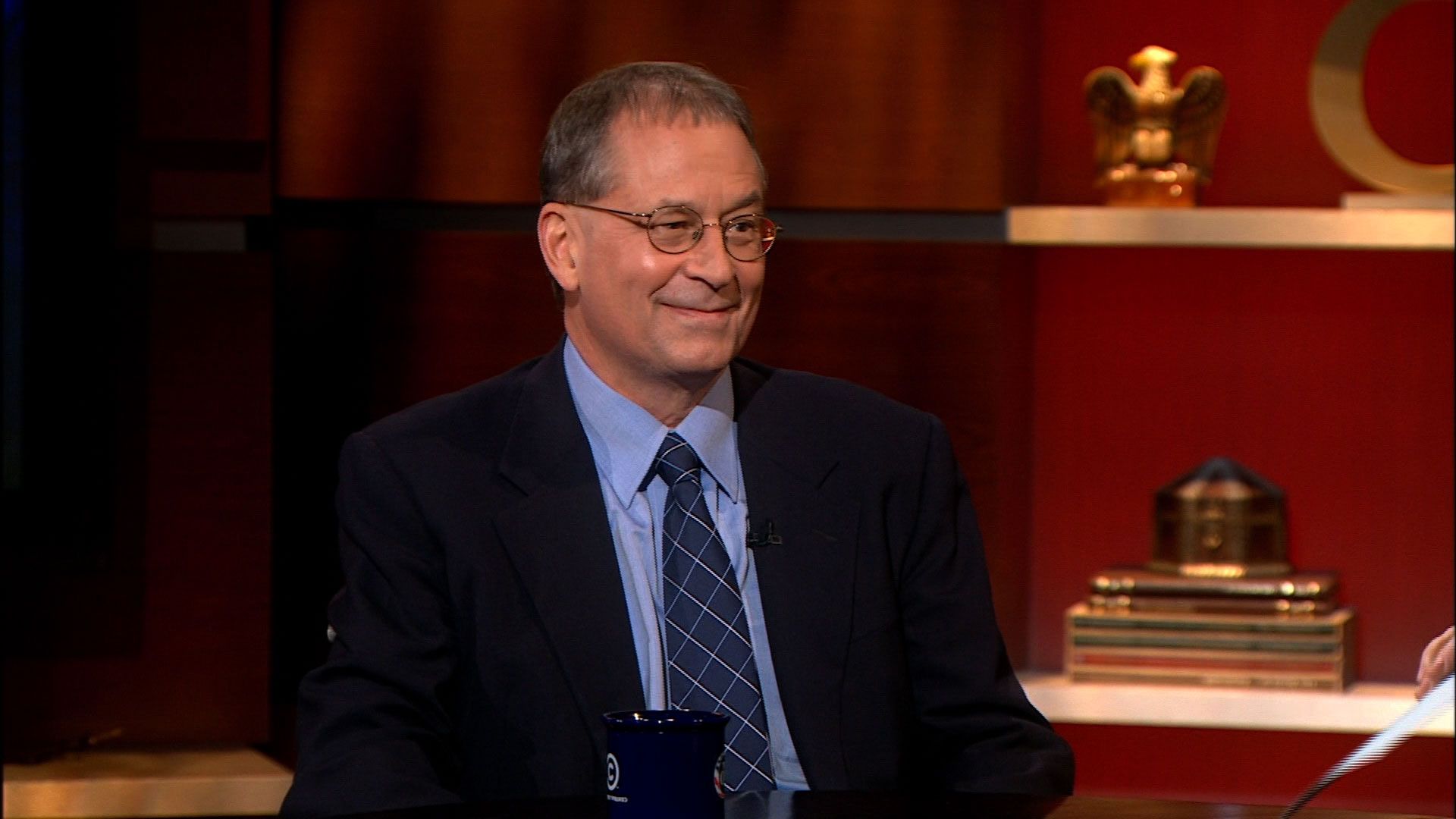 Albright estimated that the facility would take at least a year to rebuild, but likely longer since it took six years, from 2012-2018, to build it and become operational the first time.

Although the explosion will not prevent Iran from performing advanced centrifuge research at other locations, Albright said that only the Natanz facility had the potential capability to mass-produce advanced centrifuges in the thousands.

Most importantly, it is a major setback for moving forward with the IR-4, the only advanced centrifuge which has been expected to show more immediate promise.

Iran has a variety of other advanced centrifuges that it shows off for public relations, but which have failed completely or are still far from fully operational.

The Natanz explosion is considered the most significant of six explosions that have occurred in Iran since late June, shaking the regime’s confidence.

To date, Tehran has not responded and it is unclear if it has a solid lead on who caused the explosions, or if some of the explosions may have been caused by outdated infrastructure.

The explosions come 14 months after Iran started to violate the 2015 nuclear deal’s limits, with estimates that it is four to six months from being able to produce a nuclear bomb.

Will Iran ‘go nuclear’ over its latest nuke site setback? 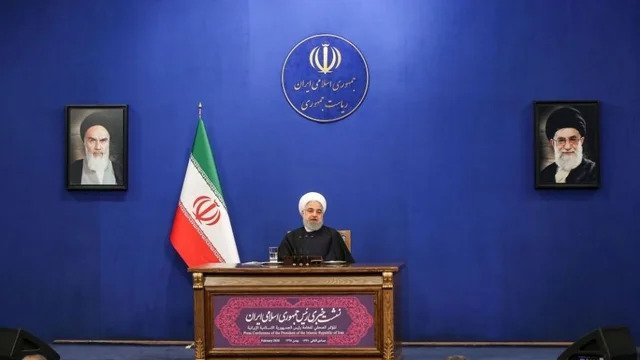 Don’t expect the truth about what happened from Iranian leaders like President Hassan Rouhani.

It looks as though a “nuclear war” of sorts has started in the Middle East. Iran’s centrifuge assembly plant at its main enrichment site of Natanz was destroyed last week, possibly with a bomb, according to some reports. What exactly occurred is the subject of much speculation. Iranian officials have said they know what happened but will announce it “later.”

Don’t expect the truth. The first Iranian report of the incident included a photograph that suggested just one corner of the building was damaged, and a few doors blown open. A satellite image of the facility was published Sunday indicating it was largely destroyed. The original photograph had been taken from the one angle that cast doubt on such an interpretation.

Many people believe that Israel is responsible for whatever happened, as well as a series of recent other unexplained happenings in Iran — an explosion at a Tehran clinic, a blast at a missile research facility, and a fire at a power plant. Israeli Defense Minister Benny Gantz commented Sunday that Israel wasn’t “necessarily” behind every mysterious incident in Iran. Intended or not, in Washington parlance, that is a non-denial denial.

Although the Natanz enrichment plant itself was an obvious target, the fact that it is buried deep under a concrete and enmeshed steel roof makes it impenetrable to most bombs other than American bunker busters, or a nuclear bomb itself. Israel’s probable fear is that Iran is restarting production of its IR-2m centrifuges.

Currently Iran relies on IR-1 types, which for design reasons cannot enrich uranium to the level needed for an atomic bomb. Iran’s existing stockpile of the more capable IR-2m centrifuges, some of which it was allowed to retain after the 2015 Joint Comprehensive Plan of Action (JCPOA), have been poorly stored and are probably unusable.

The assumption is that Iran has restarted large-scale production of the IR-2m centrifuges — or at least it had until last week. A centrifuge can be likened to a top-loading washing-machine, except it is taller (several feet) and has a smaller diameter (perhaps a foot or less). A single centrifuge is made up of a basic spinning vertical cylinder — the rotor — plus perhaps 200 smaller bits. A top-loading washing machine makes awful noises if the laundry is badly loaded. An enrichment centrifuge rotor, spinning at 60,000 rpm, can be unbalanced by a fingerprint.

The heavily damaged centrifuge assembly plant at Natanz no longer can be used for assembly of the IR-2ms. Whether it happened because of internal sabotage or a well-aimed drone attack will emerge sooner or later. But it is doubtful that Iran has an alternative facility. Therefore, production of IR-2ms has stopped and, from Israel’s point of view, the likelihood of Iran obtaining enough highly-enriched uranium for its first nuclear weapon has been delayed by months, perhaps even years. 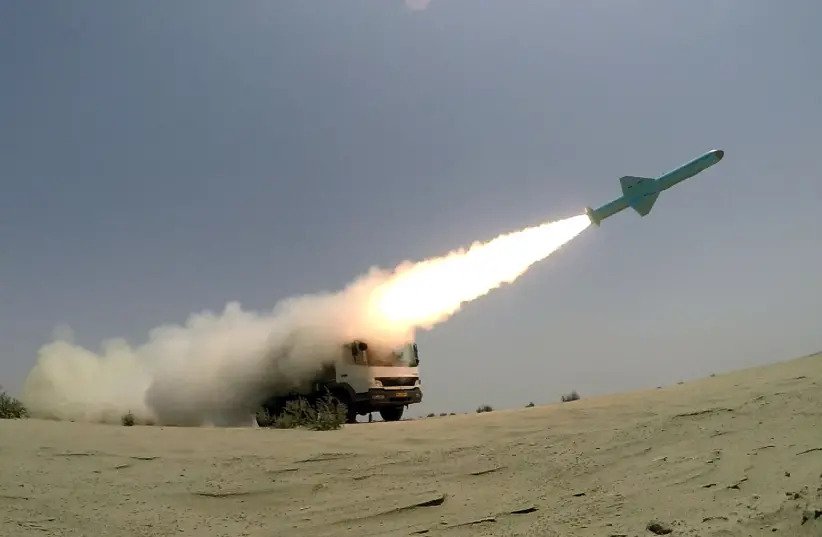 Iran can retaliate if it wishes – An Iranian locally made cruise missile is fired during war games in the northern Indian Ocean (photo credit: WANA NEWS AGENCY/REUTERS)

The story does not end there, however. How will Iran respond to this setback? And, if Israel was involved, how will the Islamic regime cope with the probable sense of public humiliation?

According to the commentators who emerge immediately in these circumstances, if Israel took action it may have been in retaliation to an Iranian cyber attack on an Israeli desalination plant a few months ago. The danger is that Tehran will think in terms of a “nuclear” response — an attack targeting an Israeli nuclear facility such as the Dimona research reactor in southern Israel.

Phlegmatically (I am, after all, originally from Britain), I could point out that Saudi Arabia preferred to directly avoid blaming Iran for its attacks on oil installations last September, and President Trump evaded the need to respond to Iranian missile attacks on U.S. facilities in Iraq after the U.S. assassination of Iranian Gen. Qassem Soleimani in January, even though the attacks thoroughly shook up the brains of multiple U.S. personnel.

Will Tehran be as restrained in its response? We are about to find out.

Simon Henderson is the Baker Fellow and director of the Bernstein Program on Gulf and Energy Policy at the Washington Institute for Near East Policy. He is the co-author of the Institute’s 2015 report, “Nuclear Iran: A Glossary.” Follow him on Twitter @shendersongulf.