Islamist victory in Tunisia, but still hope for Arab democracy Here is something that I would not have been able to write until today: with election results pouring in, Tunisia’s Enahda party has declared victory. In its breakdown of the results thus far, Tunisia’s fledgling English-language news agency Tunisia Live has reported that Enahda has won 43 of the 101 seats so far declared in the 217-seat Constituent Assembly and is expected to win a further 45, making a total of 88 seats or roughly 41% of the total. The Assembley will be tasked with appointing an interim government and will then have a year to design and implement a new constitution, allowing for Parliamentary and Presidential elections to be held.

Al Jazeera‘s live election blog has reported that as it searches for coalition partners,  Enahda issued a press statement indicating that it would cooperate with other parties and attempt to represent all Tunisians.

“We are pleased to see that the political climate has left behind the tension that was naturally part of the election campaign, and we are pleased to hear mature and responsible stances from political leaders. We certainly need to learn new democratic principles, including the fact that the opposition has an important role to play.”

“We stress once again that we wish to cooperate with all parties without any exclusion. We are open to all political parties inside the assembly and outside it, as well as civil society bodies such as the great Tunisian trade union and other unions.”

“We are in talks in order to form alliances based on a shared economic, social and political program.”

Enahda, of course, is Tunisia’s Islamist party, the party that “experts” have been predicting would win 25-30% of the vote, some suggesting that anything more would be disastrous and predicting that while they would appear moderate at first, they would slowly evolve into a more ominous presence over time.

Anything more than 30 per cent would result in heightened tensions, predicted Hamadi Redissi, at the University of Tunis. “Islamists will probably get 55-60 seats,” he added. “At this level the phenomenon can be managed. Anything more than that will create a political crisis.”

… Few Tunisians believe Nahda will immediately pursue a fiercely Islamist agenda even if it wins more of the vote than predicted. Instead, they believe the party will attempt a gradual change.

“Like all politicians, Ghannouchi and Nahda see a window of opportunity,” said a western diplomat. “This is a long-term game and they don’t want to scare people away.”

As its leader, Rachid Ghannouchi, told Guardian reporters Angelique Chrisafis and Ian Black, Enahda’s public agenda has followed what by Western standards would be a socially conservative but left-of-centre agenda.

Nahda has promised 590,000 new jobs over five years and to cut unemployment to 8.5%. Ghannouchi said: “Economically we want a model like Sweden, a social model [and] welfare state, while encouraging entrepreneurs.”

On family values, Nahda has promised not to touch the Tunisian legal code which made it the only country in the Arab world to outlaw polygamy, mandated women’s approval to get married and set limits on a man’s power to divorce. But Ghannouchi wants to promote the importance of marriage and lower the divorce rate.

“There was a process of dismantling and fragmenting society under despotism, the family was crushed,” he said. “We have the third highest divorce rate in the Arab world. There’s a societal problem, which we want to address and not brush over.” 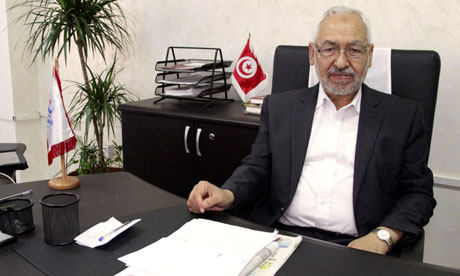 Many questions remain as to Enahda’s true agenda. Skeptics point to the contrast between the party’s official rhetoric and the hardline actions of their supporters on the ground, which recently included the firebombing of a television official’s home because his channel aired a cartoon that depicted God. Ghannouchi himself has a history of less-than-savoury views. As Gabriel Scheinmann outlined in January, he has in the past desplayed overt antisemitism, anti-Westernism and support for terror.

Ghannouchi is, moreover, absolutely opposed to any negotiated solution to the Arab-Israeli conflict, swearing to wait out Israel’s destruction. “Our Ummah,” he wrote, “will tear every document signed in a state of capitulation and incapacity and will disregard every treaty that in a moment of weakness is forged to strip it of its right to struggle for the restoration of what has been usurped. The crusaders’ occupation of Jerusalem lasted for about a century” and yet the Islamic claim to it was neither abandoned nor relinquished.

Following the end of the Gaza War in January 2009, Ghannouchi praised Allah who “routed the Zionist Jews,” and labeled the Israeli withdrawal from Gaza in 2005 as “the first step in the complete victory of all of Palestine and the holy places of the Muslims.”

He branded the Palestinian Authority as illegitimate because it “has given up the choice of jihad in the way of Allah Almighty as an effective means of defeating the occupation and the liberation of the Islamic holy places,” and called for the recognition and support of the Hamas government because it was “maintaining the Resistance against the Jewish Zionist occupation.”

In all likelihood, as public scrutiny of the party continues, moderate and hardline factions will emerge. There are also a number of failsafes in the Tunisian system that could prevent any pernicious Islamist agenda in the near future. For example, in an absolute first in the Muslim/Arab worlds, the Tunisian election saw affirmative action quotas, with half of all candidates required to be women. This will likely go a long way in ensuring that women’s rights cannot be curbed overnight. In fact, Enahda has been at least using the terminology of human rights, making it extremely rare if not unique in terms of global Islamist movements.

… Ghannouchi said: “We want to strengthen women’s rights, on workplace harassment, domestic violence, and better childcare so women can continue their careers.”

Many point to the 2006 Palestinian elections as an example of the threat that Islamist parties pose towards democracy. In those elections, Hamas defeated the relatively secular Fatah party and subsequently siezed control of Gaza. That said, Enahda lacks what was ultimately Hamas’ key to power: military dominance. Tunisia’s army is firmly secular and would be unlikely to put up with an Islamist coup or a severe curtailment of democratic institutions.

Furthermore, even if Enahda is successful in forming a governing coalition, its failure to reach a clear majority will force it to engage in the dealings and compromises that are required for minority rule in parliamentary democracies. The party will be judged not only on its Islamist credentials, but on its economic management — an area in which its leaders have neither extensive experience nor a religious answer, forcing them to rely on external advice to a considerable extent.

Also, the possibility remains that the 60% of non-Islamist parties that were elected will be able to cobble-together a broad coalition, leaving Enahda to oppose and irrespective of this, the first term of the Assembly will probably see many of them joining due to aligned interests as the democracy matures. Of course, there is still the possibility that the democracy will fail, either due to an Islamic revolution or with the military being reluctant to hand over power. That said, there are enough positive factors to permit some degree of cautious optimism from the supporters of democracy.