In an unprecedented interview that would never have been possible until very recently, MSNBC’s Richard Engel has spoken to Aboud al-Zomor, a man who has been locked away tightly in the depths of Egypt’s penal system since he was convicted of orchestrating the assassination of then Egyptian President Anwar Sadat in 1981. Zomor was one of the founders of Egyptian Islamic Jihad (EIJ), a militant offshoot of the Muslim Brotherhood. His number two and successor was Ayman al-Zawahiri, the Egyptian doctor who later brought EIJ under the umbrella of al-Qaeda and has recently gone on to replace bin Laden as the leader of the world’s most notorious terror organisation.

The assassination is generally believed to have been planned as a response to Sadat signing the peace agreement with Israel in 1979. Zomor claims, however, that this was only a part of the picture – peace with Israel certainly drove the Muslim Brotherhood against Sadat, but the move to dispatch him was part of a wider plan to create an Islamic revolution in Egypt, transforming the country into a theocracy.

The decision [to kill Sadat] was based on a number of factors together. The first issue was the issue of sharia [Islamic law], that he was standing against sharia, against its implementation and application. This was the primary reason that this regime must be removed. The second issue was that [Sadat] broke into the people’s rights with the idea of tyranny. He dissolved the people’s assembly [parliament] that had a few opposition figures – not more than could be counted on the fingers of one hand – he removed them because they opposed the peace agreement and it’s everyone’s right to have a point of view… But he was a tyrant, and he dissolved and he cheated and he made his party the one in control and running everything. The third issue is that Egypt reached such levels of tyranny that he attacked the Islamic movements. We were confronted aggressively.

At a time when the US is engaging the Muslim Brotherhood, it is important to reflect on the group’s history and its previous leaders – like Zomor. Certainly, there are those in Egypt who are giving strong warnings as to the kind of culture that the Brotherhood still holds. For example, Muntasar al-Zayat, an Egyptian lawyer who is renowned for defending clients from terrorism charges, has recently called for the indictment of high-profile Brotherhood cleric Yousuf al-Qaradawi. Qaradawi is strongly supported by prominent Western Muslim figure Tariq Ramadan and is a celebrity in the Arab world, hosting a popular television show on al-Jazeera called “Shariah and Life“. 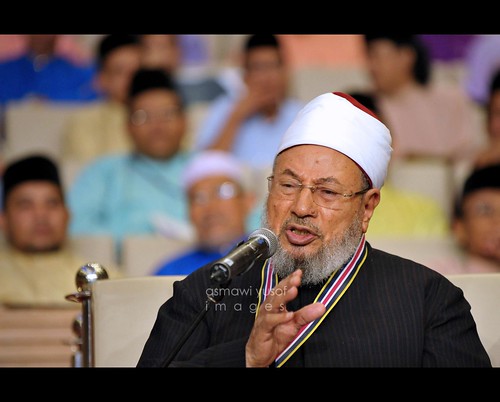 As Zayat explains, Qaradawi is responsible for the incitement of much of the terrorism in the world today:

Al-Qaradhawi called for Jihad against U.S. forces in Iraq, so why do we only demand accountability from those who answered the call?

Qaradawi’s views on peace with Israel are unequivocal. As reported in The Jerusalem Post earlier this year, he has expressed them clearly on his al-Jazeera program:

He [Qaradawi] said that the war against the Jews was not only the war of the Palestinians but of all Muslims. He said that the prophet Muhammad had said that “you will continue to fight the Jews and they will fight you until the Muslims kill them. The Jew hides behind rock and tree. The rock and the tree say, ‘Oh, slave of Allah, oh, Muslim, here is the Jew behind me, come and kill him.'”

Fortunately, the current interim government in Egypt, at least, is committed to maintaining Sadat’s peace accord with Israel. The Foreign Minister, Muhammad al-Orabi, has said as much to the mainstream Arab press, as has the leader of the secular Wafd Party, Ahmed Ezz el-Arab.

That said, el-Arab has some rather disturbing views on other matters. As reported today in Haaretz, he denies that the Holocaust ever happened and also claims that 9/11 was a plot orchestrated by the US.

“The Holocaust is a lie,” Ahmed Ezz El-Arab, Wafd Party leader told the Washington Times in Budapest where he was attending the Conference on Democracy and Human Rights.

He went on to explain that it was factually impossible to claim that the Nazis killed 6 million Jews, saying “the Jews under German occupation were 2.4 million. So if they were all exterminated, where does the remaining 3.6 million come from?”

… The Wafd leader denied that Osama bin Laden, the al-Qaida leader who was recently killed in an American raid on his compound in Pakistan, was behind the attacks… El-Arab blamed the CIA, Israel’s Mossad and the “military-industrial complex”.

This certainly presents some worrying indications of where Egypt may be heading. Hopefully, the people who end up forming the new regime will not share the views of either Qaradawi or el-Arab.