Home » Rockets from civilian areas: Hamas and Islamic Jihad are fooling no one

Rockets from civilian areas: Hamas and Islamic Jihad are fooling no one The most unfortunate consequence of any war is that innocent people are invariably caught in the crossfire. The current conflict in Gaza is no exception, as can be seen by the tragic deaths of members of the Dallu family on Sunday from what appears to have been an erroneous airstrike on the part of the Israelis. The IDF were trying to target Hamas commander Yihya Abayo and, for reasons still unclear, hit the nearby Dallu household instead. The incident is currently under investigation.

Nevertheless, there is overwhelming evidence that the human toll that the war is taking is being exacerbated substantially by the tactics that Hamas, Palestinian Islamic Jihad (‘PIJ’), and other Gaza militant groups are employing. These groups have taken a decision to conduct military operations — particularly the launching of rockets into Israel — from positions deeply embedded in civilian areas. This means that, however much care it takes to target only military objectives, Israel is unable to strike at rocket teams without a very high probability of civilian casualties.

Hamas’s tactic is as simple as it is criminal and brutal. Its leaders know that by repeatedly firing rockets at Israeli civilian areas, they will give Israel no choice but to respond. Israel’s response will target the rockets and those sending them. In order to maximize their own civilian casualties, and thereby earn the sympathy of the international community and media, Hamas leaders deliberately fire their rockets from densely populated civilian areas. The Hamas fighters hide in underground bunkers but Hamas refuses to provide any shelter for its own civilians, whom they use as “human shields.” This unlawful tactic puts Israel to a tragic choice: simply allow Hamas rockets to continue to target Israeli cities and towns; or respond to the rockets, with inevitable civilian casualties among the Palestinian “human shields.

An example of the horror that this can lead to was shown on Monday’s 7:30 Report on ABC:

Nine-month-old Hanin Haled Tafeshi was wounded in an air strike on the first night of the Israeli operation. Her little skull was fractured, causing dangerous swelling on the brain. For her father, Khaled, a bakery worker, it’s an incomprehensible outrage.

KHALED TAFESHI, FATHER (voiceover translation): No-one was firing rockets near us. The Israelis are firing on kids and old people. …

MATT BROWN: Debris thrown up by an Israeli air strike had crashed through the roof. Mud and the little girl’s blood were splashed on the walls.

It was, of course, a freak accident that this piece of errant shrapnel happened to come down where it would injure Tafeshi. Unfortunately, such accidents are almost inevitable when striking the areas from which Palestinian rocket teams are firing. Israel is given the awful dilemma of either choosing not to take-out the rocket team — thereby exposing its own civilians to enemy fire — or to take-out the rocket team with a high chance of hitting Palestinian civilians. For that very reason, conducting military operations from within civilian areas is considered to be a war crime, not that this seems to bother the groups in Gaza.

Matt Brown went on to interview a representative of PIJ about the tactic of firing from civilian areas. The militant did not even attempt to justify the practice, instead trying to deny that it is a common trend:

MATT BROWN: The men who fire rockets from eastern Gaza could not be reached for comment, so we asked a representative of one of the most radical groups, Islamic Jihad, for an explanation.

ISLAMIC JIHAD MEMBER (voiceover translation): We do not deliberately go to residential areas to launch rockets. We avoid them.

MATT BROWN: It’s just not true that the rocket crews don’t fire from near civilian dwellings. We’ve seen videos of it. We’ve seen the vapour trails of the rockets coming out from very close to civilian homes.

ISLAMIC JIHAD MEMBER (voiceover translation): This is only in limited cases, but we believe Israel is bombing the population deliberately.

It may not come as a shock that the man from PIJ was lying, but as can be clearly seen from many images coming out of Gaza, firing rockets from civilian areas is hardly ‘only in limited cases’. In fact, it appears more like standard practice.

According to the Australian‘s John Lyons, who reported from Gaza yesterday, the residents of Gaza are well-aware of this tactic and, fearful of Israeli counter-attacks, are even starting to have hostile reactions against militants who want to fire from their neighbourhoods:

In Gaza, the first you know of an incoming bomb is the boom. The other sound is outgoing missiles. Fights have been breaking out between some groups when residents of an area become angry with militants wanting to fire from their neighbourhood.

Israel responds quickly and forcefully, and those still in the area where the rocket was fired face the consequences.

But then, as the old saying goes, ‘a picture is worth a thousand words’, and there is no small number of photos of rockets being fired from civilian areas — both from the present round of conflict, and from rocket attacks going back a number of years — to prove beyond a shadow of a doubt that this is a long-standing tactic for Gazan militants. Below are just a few examples from Western media outlets and from the Palestinian media. 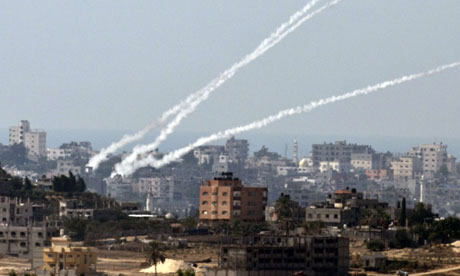