Since the beginning of the recent wave of terrorism in Israel, Palestinian officials and spokespeople have continuously described Palestinian perpetrators of terror attacks not only as glorious martyrs, but also as innocent victims of so-called Israeli aggression and ‘executions’. This inversion of perpetrator and victim has also been replicated by many international media outlets, which tend to refrain from labelling attackers as terrorists or even as Palestinian, creating a false implication that none of the Palestinian casualties of the recent weeks were killed or injured while carrying out attacks, which many of them in fact were (see my previous blog post as well as a comprehensive report by CAMERA).

However, the distortion of reality is now being taken to the next level, or a new low, with reports in Palestinian media, including official Palestinian Authority (PA) TV, that Israel is intentionally fabricating stabbings to conceal and justify the killing of ‘innocent’ Palestinians. Palestinian Media Watch (PMW) revealed that numerous reports alleged that Israeli security forces plant knives and weapons at the scenes of terror attacks in order to incriminate the totally blameless Palestinian ‘victims’.

In one example from 12 Oct., hosts on of PA TV not only claimed that Israel is conducting “executions of [Arab] citizens”, who are “constantly exposed to cold-blooded murder for no reason”, but also that “the Israeli version is always fabricated and false” and that “they [the Israelis] have the knives ready in case they target someone. They have the knives ready.”

The same lie was reiterated the following day (13 Oct.) by a news reporter on official PA TV:

“The occupation police is executing our children and youth in cold blood just because it suspects them. Then it falsely accuses them and fakes [evidence] to justify its crimes… Scenes of children being killed due to mere suspicion, painful scenes which even Hollywood’s greatest directors have trouble directing, the Zionists direct skilfully.”

The official PA daily newspaper Al-Hayat Al-Jadida also spread this libel on several occasions. For example in a recent op-ed (13 Oct.), regular columnist Hafez al-Barghouti claimed that “most of the Israeli versions of stabbings are false and forged, and we can appeal the stabbing stories, since the Israeli government is exaggerating with lies and fabrications.” This far-fetched conclusion was based on a suggestion that “ambiguity surrounds the stabbings which Israel is announcing” because “we haven’t seen any injured Israeli.” Not only did the op-ed ignore the widely-reported Israeli victims of the attacks, it also repeated the lie that the Palestinian casualties were innocent, victims of intentional Israeli manipulation and conspiracy:

“it is easy for a settler to shoot any Palestinian… it is easy for a border policeman to throw a knife near a body of a young person after his cold-blooded murder and claim a student was making a stabbing attempt.”

Listening to such reports and articles, one might think that the only casualties of the recent violence are innocent unarmed Palestinians, targeted by Israelis based on mere suspicion. The Israeli victims who were injured and killed during these attacks, as well as CCTV and video footage that is available in many stabbing cases, clearly disprove these outrageous claims. But these reports are based on lies and incitement, and thus not susceptible to evidence and facts.

The lie of Israeli ‘cover-ups’ or fabricated justifications for so-called ‘executions’ had also been repeated via images, as well as words. A cartoon, depicting a soldier stabbing a Palestinian in the palm of his hand before claiming the Palestinian is a knife-wielding terrorist, appeared on the Fatah website and on Al-Hayat Al-Jadida. Other cartoons with a similar theme and message, accusing Israel of fabricating stabbings as an excuse to harm Palestinians, appeared in the official PA daily at least on two other occasions in recent months, according to PMW. 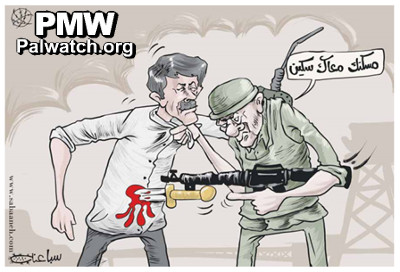 This is only the most recent lie in a long list of falsehoods that constitute the incitement, coming from both mainstream and social media, which fuels this wave of terrorism. Like previous historic libels, its aim is to shock and enrage people in its target audience, mainly Palestinian youth, and motivate them to take violent actions against Israeli Jews.

International media has so far largely ignored the issue of this incitement rooted in complete falsehoods. This is a crucial sin of omission, given that it is at the root of the recent outburst of violent attacks. Many media outlets, including the ABC, have regularly mentioned the occupation as the root cause of the attacks in recent weeks; some commentators have gone as far as to portray violence as an “inevitable” result of Palestinians’ frustration, and therefore implicitly justified.

This is as morally dangerous as it is false. The current attacks are not an uprising against the occupation. First of all, the demographic and geographic context of the attacks suggests that they have little to do with “resisting occupation”: most Palestinian attackers have been permanent residents of east Jerusalem or Israeli Arab citizens. Neither live under military occupation. Also, many of the attacks have taken place in Jerusalem and pre-1967 Israel, not the West Bank. To argue that attacks by residents and citizens of Israel on civilians in pre-1967 Israel is due to frustration about the occupation is to argue that Israeli cities inside the 1967 armistice lines such as Afula, Ra’anana and Be’er Sheva are ‘occupied.’

The main problem with the ‘occupation’ argument, however, is deeper – it ignores, or only pays lip service, to the ongoing campaign around the al-Aqsa Mosque, and the inflammatory, and false, claim that Israel is trying to change the status-quo regarding access to the Temple Mount.

False claims that Jews are plotting to destroy or take over al-Aqsa have been used, from time to time, to mobilise people to violence against the Jewish population for decades. They are accompanied by historical revisionism and attempts to erase any link between the Jewish people and the Temple Mount, and Jerusalem in general, despite the archaeological and historical evidence, as well as scholarly and academic research, that prove such ties (for more on Palestinian revisionism, see HERE).

Only last week (25 Oct), the Mufti of Jerusalem, Sheikh Muhammad Ahmed Hussein, declared in an interview in Arabic to Israel’s Channel 2, said there was never a Jewish temple on Temple Mount, and that the site was a mosque “3,000 years ago, and 30,000 years ago”, basically “since the creation of the world.” He added that “this is the al-Aqsa Mosque that Adam, peace be upon him… or during his time, the Angels built.”
Abd al-Malik ibn Marwan, the Caliph of the Umayyad dynasty who commissioned the construction of the Mosque, might be disappointed that the Mufti is so eager to give the angels credit for constructing al-Aqsa, robbing him of his legacy.

The purpose of the Palestinian denial of Jewish links to Temple Mount is to justify their rejection of Jewish presence on the site altogether, not a desire to maintain the status quo (which allows all non-Muslims to visit the Mosque compound, but does not allow them to pray there).

This was evident in Abbas’ recent statement (17 Oct.), in which he made far reaching claims for religious sites all over the Old City:

“The al-Aqsa Mosque is ours. The Church of the Holy Sepulchre is ours as well. They have no right to desecrate the mosque with their dirty feet, we won’t allow them to do that.”

In the same speech Abbas also proved once again that the current escalation in attacks is about al-Aqsa and Jerusalem, and continued to incite and glorify terrorism:

“Every drop of blood spilled in Jerusalem is pure, every shahid [martyr] will reach paradise, and every injured person will be rewarded by God.”

In a recent op-ed for the Times of Israel (Not an uprising against occupation. An uprising against Israel, 20 Oct.), David Horovitz summed-up how incitement, especially false rumours about al-Aqsa, have played a key role in the current wave of terrorism:

“What we face now is unknown numbers of potential attackers, who’ve been stirred to murderous fervour by a thoroughly organized campaign of hatred against us. The message that ‘the Jews are plotting against al-Aqsa’ has been pushed for months by Palestinian political chiefs, spiritual leaders, mainstream and social media…”

The result? A seemingly spontaneous ‘uprising’, leaderless on the surface, but supported by Palestinian media, rumour-spreading Facebook pages, political leaders and imams, like Sheikh Muhammad Sallah from al-Abrar Mosque in Gaza, who in a sermon and with a knife in hand called on Palestinians in east Jerusalem and the West Bank to carry out stabbing attacks:

The message is internalised by some, as Horovitz describes:

Still, the media is far more interested in discussing occupation than incitement and al-Aqsa, as was evident in an English interview with Yair Lapid, leader of centrist Yesh Atid party, on France24’s The Interview. When the interviewer asked Lapid about the recent wave of violence, and suggested that it is a result of Palestinian frustration regarding the occupation, Lapid questioned the premise of the question, and responded:

“Even the Palestinians are not saying that this current wave of violent events has anything to do with the occupation or the lack of peace process. [These are] religious Islamic fanatics who are killing people because they think someone has changed the status quo in the Temple Mount, which is not true […] [It is the result of] a process of self-radicalisation of young Muslims who are watching horrible, terrible videos on the social networks … and being inflamed by imams in mosques who are telling them, ‘The Jews are trying to do something horrible to our holy places.'”